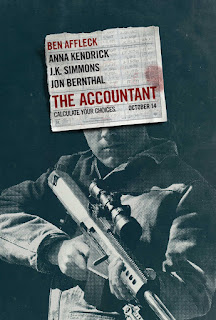 Midway through “The Accountant,” an icy voice phones a treasury agent and asks, “Do you like puzzles?” In the case of “The Accountant,” the puzzle presented is both intriguing and entertaining. Ben Affleck plays an adult, living with a highly functional form of autism. He loves numbers and working out of a strip mall, living a secret life as the guy who can straighten out the books of the most frightening of criminals. He’s also a secret superhero, having been taught the art of self defense by his tough military father. The boy develops lethal hands. And he’s a sharpshooter. Assigned to figure out a money drain in a high-tech medical firm (headed by John Lithgow) the accountant gets into a gang war with forces that don’t want him to get to the bottom of their scheme. The mix of back stories and the streams of several intriguing plots keep this story going. As with many movies, the final act turns into the usual shootout, with a twist some may find a bit of a groaner. I like this because of the fun of watching it come together. Affleck nails this role, and the movie’s full of great actors at the top of their game. “The Accountant” also expands knowledge of autism and does it in a respectful manner. 3 stars. Rated “R” for violence. Does it deliver what it promises? Great thriller with a just OK ending. Is it entertaining? Well worth watching. Is it worth the price of admission? This could be the start of a great series.
Posted by Arch Campbell at 2:17:00 PM