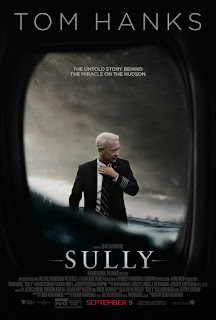 "Sully" arrives with high expectations, thanks to Clint Eastwood directing and Tom Hanks acting. The team more than meets the challenge in one of the year's best movies. Based on the events of January 2009, Hanks plays U.S. Air pilot Chesley "Sully' Sullenberger, whose passenger jet lost both engines a few minutes after takeoff from New York's LaGuardia Airport, when the aircraft hit a flock of Canadian geese. Eastwood recreates the moments in the air, in a series of hold-your-breath scenes. As with the recent O.J. Simpson documentaries, even though we know the successful outcome, Eastwood and the script hold our attention, mixing the the event with the National Transportation Safety Board hearings that followed. ("Sully" makes it appear the hearings took place immediately: I understand they took place several weeks later.) The movie makes the hearings look like a witch hunt, as board members appear to want to prove Sullenberger could have returned to LaGuardia, as they question his decision to land on the Hudson River. The outcome celebrates a triumph of the human factor in our increasingly computer dependent age. "Sully" raises a few questions. I wondered if U.S. Air brass pushed Sullenberg toward the media to promote their airline. I also wondered if the airline resented Sullenberger for not returning their expensive equipment to the ground, where they could repair and use it again. "Sully" includes the always excellent Laura Linney as Sully's wife, but doesn't give her much material beyond expressing concern and near-hysteria. Aaron Eckhart fares better as Sully's co-pilot. The men bond, solving their life or death situation and then enduring the hearings that follow. Anna Gunn, so well known from "Breaking Bad," stands out as one of the NTSB board members, but doesn't get to do much beyond scowling and passive-aggressive questioning. "Sully" also falters, when it lays on the kind of stories "Airplane" parodied in 1980... the crying infant in his mother's arms, the father separated from his son, and the elderly grandmother returning home. In spite of these minor flaws, "Sully" succeeds as a story about calm leadership. It delivers joy and uplift, and couldn't come at a better time. Does it deliver what it promises? Eastwood and Hanks at their very best. Is it entertaining? Gripping and compelling, and an award contender. Is it worth the price of admission? See it in theaters, because I doubt they'll show it as an in-flight movie. 3½ stars. PG-13 for language and a frightening situation.
Posted by Arch Campbell at 12:24:00 PM