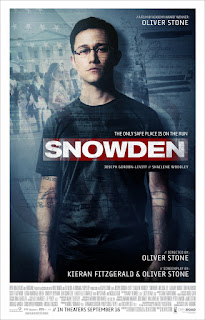 Oliver Stone's new film tells the story of Edward Snowden, the CIA computer expert who went public with the agency's ability to track or spy on almost anyone, anywhere in the world. Snowden blew the whistle in the name of government invasion of privacy. This story perfectly fits Oliver Stone, who loves films that touch on American history and issues related to big government and the government war machine. "Snowden" indicates that even the most paranoid of us, sometimes has a point. Joseph Gordon-Levitt plays Snowden as one of those young people who seem to have been born old. Dropping out of high school to go to work, he enlists in the Marines only to discover his bones couldn't take the stress. Applying to the CIA, he finds mentors in an agency operative right out of George Orwell played by Rhys Ifans, and an older computer nerd played with gusto by Nicholas Cage. Shailene Woodley adds more tension as Snowden's girlfriend. Her liberal beliefs and outlook challenge Snowden's sense of duty. It will take years and probably decades to determine if Edward Snowden is a patriotic whistleblower or a government traitor. Stone comes down on the side of whistleblower, but leaves room for you to decide. Stone's film shapes an ordinary life into a thriller with touches of "Big Brother" science fiction. Sometimes I felt that Stone might have had more fun amping up the fiction rather than sticking to the facts. Does it deliver what it promises? Real life thriller. Is it entertaining? A little long and sometimes dull, but also sometimes fascinating. Is it worth the price of admission? Why not, Big Brother is watching.
Posted by Arch Campbell at 7:30:00 PM