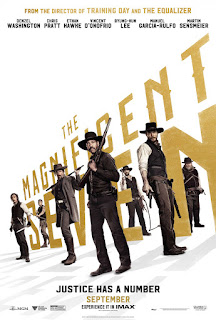 The best moment of "The Magnificent Seven" comes when the closing credits roll and a full orchestra plays the stirring music from the 1960 original. That music is about as close as this remake comes to replicating the excitement of the classic. Denzel Washington looks pretty cool on a black horse with a black hat wearing an all-black outfit, as the settlers of a small town beg him to provide them with justice and revenge. They want the scalp of Peter Sarsgaard, who begins the movie with a pro-capitalism speech before murdering a couple of the townspeople for talking back to him. Feisty farm wife turned widow Haley Bennett recruits Denzel, who in turn assembles his team, including an Indian, a Mexican, a Chinese guy, a Confederate soldier, a mountain hermit, and a wise-cracking smarty-pants cowboy played by Chris Pratt. I almost didn't recognize Vincent D'Onofrio as a mountain hermit. Ethan Hawke adds a few good scenes as an ex-Confederate marksman, fed up with killing. The group ride into town, and the shooting begins. Considering the great actors and the beautiful scenery, I thought this remake would come up with more than cause and effect, violation and revenge. It doesn't. There's a one-dimensional quality to this that left me empty. 2½ stars, "PG-13". Does it deliver what it promises? Disappointing remake. Is it entertaining? One-dimensional. Is it worth the price of admission? Not worth the money.
Posted by Arch Campbell at 5:43:00 PM