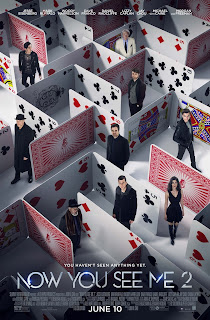 Another adventure of the group of rogue magicians calling themselves "The Four Horsemen," who pride themselves on using magic to take on the corporate devils of the world. Woody Harrelson, Jesse Eisenberg, and Dave Franco return with a new partner played by Lizzy Caplan, who adds plenty of spark to a complicated story involving corporate bad guy Daniel Radcliffe, plus FBI good or bad or double agent Mark Ruffalo and Morgan Freeman as yet another magic double agent. "Now You See Me 2" suffers from a complicated, hard-to-follow plot, sprinkled with magic gags that come off as contrived camera tricks. David Copperfield has a hand in the production, which adds to the slickness but not to the believability. The original was a good enough comedy adventure. This sequel tries to milk a little more fun from an idea whose time has past. Does it deliver what it promises? Comedy about magicians. Is it entertaining? Long and complicated. Is it worth the price of admission? Now you don't.
Posted by Arch Campbell at 12:00:00 AM