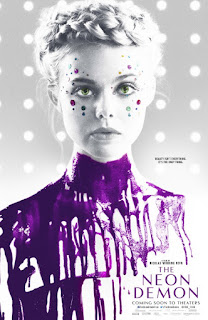 Dakota Fanning's younger, quite beautiful sister Elle enters L.A.'s cutthroat (literally) world of super models in  "The Neon Demon," director Nicolas Winding Refn's supermodel horror fest. We're supposed to believe Elle is sixteen and innocent, which makes her easy picking in the business. Make up artist Jena Malone offers to take Elle under quite her creepy wing, and gets even closer after Elle's encounters with Keanu Reeves, who plays an over-the-top motel manager. Elle achieves a small degree of success; but enough success to anger the older, more established models, who decide to eat her alive. You may think I'm kidding, but "The Neon Demon" starts slow and builds to a series of events rarely seen in film. If you go, you'll find yourself saying, "Please no, don't do that." Does it deliver what it promises? Super model horror film. Is it entertaining? Disgusting. Is it worth the price of admission? No thanks.
Posted by Arch Campbell at 1:28:00 PM