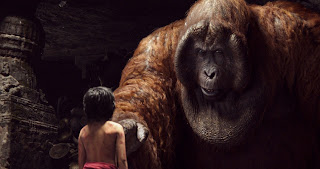 A lot of us remember “The Jungle Book” as one of Disney’s later cartoon efforts, showcasing Louie Prima as a swinging singing orangutan. Director Jon Favreau mixes live action with computer effects to respectfully recreate the world serious readers discovered in the tales of Rudyard Kipling. Young Neel Sethi makes a fine impression as a child, saved by the panther Bagheera and brought to a wolf pack who agree to raise him. As with “The Lion King” the child Mowgli will have to face his adversary... an angry lion named Shere Khan voiced by Idris Elba. Banished from the colony for his own safety, we watch the kid’s journey and the characters he encounters, most notably a hilarious bear voiced by Bill Murray, and King Louie the giant ape voiced by an over the top Christopher Walken. This “Jungle Book” makes occasional stops for musical numbers; but the accent’s on adventure, and the adventure is family friendly and delightful. Does it deliver what it promises? A kid learns about life in the jungle. Is it entertaining? Dazzling. Is it worth the price of admission? One of the year’s best.
Posted by Arch Campbell at 7:35:00 PM