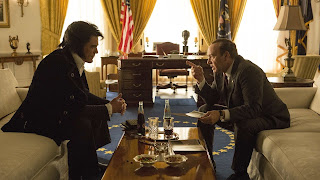 Elvis Presley really did request a meeting with Richard Nixon in 1970 after first showing up unannounced at the White House gate. “Elvis & Nixon” imagines what happened and what led up to what happened. We, of course, will never know, because Nixon hadn’t yet wired his oval office. Kevin Spacey plays Nixon and does a good enough job, considering how often actors and comics have used Nixon’s mannerisms for impersonations good and bad. Michael Shannon puts a little pathos and soul into “The King,” who according to this account comes to Nixon requesting an appointment as an undercover drug agent. Shannon plays Elvis twitchy, naive, and both unsure and too sure of himself. The photo of Nixon shaking hands with Elvis remains one of the most requested of the National Archives.  The picture of the two together conjures up a mystery. I’m not sure “Elvis & Nixon” satisfies the question mark, but it’s great fun to watch... almost as much fun as Spacey and Shannon appear to have working with each other. Does it deliver what it promises? Light historical comedy. Is it entertaining? Funny and fun. Is it worth the price of admission? A nice way to spend a couple of hours.
Posted by Arch Campbell at 11:13:00 PM