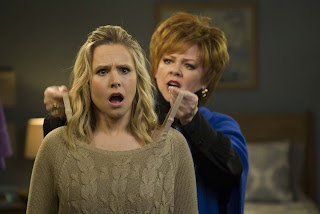 I felt the influence of Donald Trump’s campaign insults, as I laughed at the antics of Melissa McCarthy in “The Boss.” She begins the story as a hard-driving business woman, thrown into jail for insider trading. Once out of prison, she looks for a way to bounce back. This includes moving in with Kristen Bell (her former assistant) and Kristen’s little girl, played by a very winning Ella Anderson. Melissa (as Michelle Darnell) keys in on Girl Scout-style cookie sales, and pretty soon she’s recruited a girl group to turn Kristen’s brownie mix into a multi-million dollar money tree. McCarthy ad libs her way into many laugh-out-loud, stunningly-mean, insulting moments. She throws in a few physical gags, one involving a couch that (even if expected) delivers a great laugh. In another scene, McCarthy and Bell have a smack down over the role of bras and the position of a woman’s breasts. Sometimes I couldn’t laugh, because my jaw had dropped too far down to laugh. As with several of McCarthy’s other comedies, “The Boss” can’t quite maintain the pace. The final third (like many “R” rated comedies) falls entirely flat. Peter Dinklage appears as McCarthy’s chief business rival and former lover, but doesn’t add much. Kathy Bates has a cameo as a former mentor, with the same lack of effect. Those of us who like McCarthy are waiting for her to succeed at something different. “The Boss” is about half as good as McCarthy’s best work. Does it deliver what it promises? Melissa McCarthy in a very dirty comedy. Is it entertaining? The first half is funny, but can’t maintain. Is it worth the price of admission? Not really.
Posted by Arch Campbell at 8:17:00 AM