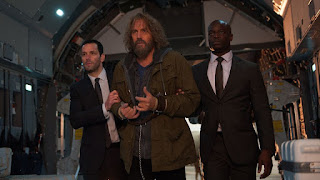 One of my favorite movies is “Face Off” in which Nick Cage and John Travolta change faces, in order to solve a crime and dole out justice. “Criminal” goes a step further. CIA agent Ryan Reynolds gets tortured to death. Super spy manager Gary Oldman, who does a lot of running around and screaming, demands scientist Tommy Lee Jones try out his new research on hardened, semi-Hannibal Lector criminal Kevin Costner. Seems Costner never developed his frontal lobe, because of an abusive father. So anyway, they tie Costner down and perform the operation and pretty soon Costner’s half-maniac, half-decent nice Ray Reynolds CIA super spy. The filmmakers dumb a lot of over-the-top violence and car chases on all of this, and pretty soon “Criminal” feels like a dozen other movies... only worse. As for the actors, Costner’s OK; but I never believed him as the lead, and Tommy Lee Jones looks like he’s sleep walking. Does it deliver what it promises? Run-of-the-mill sci-fi thriller. Is it entertaining? Mind numbing. Is it worth the price of admission? No.
Posted by Arch Campbell at 7:22:00 PM