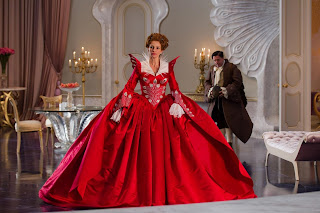 Julia Roberts tweaks her image in “Mirror Mirror” - a comic twist on “Snow White.” As the wicked queen, Julia worries about her wrinkles, her waistline, and her bank account, and sets her sights on handsome prince Armie Hammer, who turns in a fine comic performance as a neighboring hottie with a fat bankroll who often appears without his shirt. Armie’s not interested in Julia, once he gets a look at Lily Collins (Phil Collins’ daughter) who reminds many of the classic beauty Audrey Hepburn. “Mirror Mirror” looks great, has a story that turns wacky, playful and fantastic. The comic bits work pretty well. They include a band of seven dwarves, who earn their living as robbers in the forest, and Nathan Lane groveling as the evil Queen’s sidekick. I would like to tell you the movie floats along like a balloon; but unfortunately, it often feels like it’s trying too hard. I imagine the kids who ask their Moms to take them to see this won’t mind. Does it deliver what it promises? Fairy tale reboot. Is it entertaining? Some nice moments, while others fall flat. Is it worth the price of admission? For a princess.
Posted by Arch Campbell at 9:04:00 PM