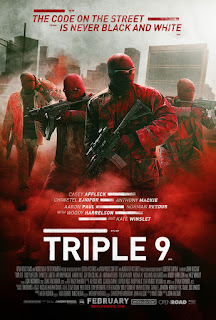 Atlanta looks dark and scary in “Triple 9” - a dirty cop, crime thriller with a first rate cast including Woody Harrelson, Casey Affleck, Chiwetel Ejiofor, Anthony Mackie, Aaron Paul, Norman Reedus, and Kate Winslet. Oscar nominee “A” list actress Winslet plays a Russian mob boss, which sometimes is fun but mostly silly. Winslet barks orders to a group of cops (and former cops) who do her bidding, thanks to a lot of murky issues including a divorce from Winslet’s oh-so-hot Russian sister. Did any of the other cops notice that one of their own, married a Russian mob princess? Guess not. The story starts promisingly, with the gang staging a heist inside a downtown bank. Their goal is the contents of a safe deposit box; and as they get it, they show the bank manager photos of his home and family to make sure he knows they mean business. “Triple 9” lays on the car crashes, explosions and shootouts. Casey Affleck and Woody Harrelson play good guy cops, trying to figure out the bad guys identities. “Triple 9” is so dark, its hard to see just who’s who. “Triple 9” looks like a lot of other movies including “Training Day” and “The Departed,” except those were original. “Triple 9” by the way, means officer down. In this case, maybe movie down. Does it deliver what it promises? Cop crime thriller. Is it entertaining? Violent. Is it worth the price of admission? Skip it.
Posted by Arch Campbell at 2:24:00 AM