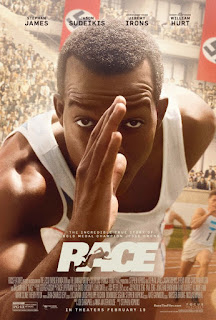 “Race” reminds the world of the accomplishments of four-time Olympic gold medal winner Jesse Owens. His amazing talent made him the global star of Hitler’s 1936 Berlin Olympics, staged by the Nazis to honor German strength and ability. Actor Stephan James plays Owens in straightforward style. We meet him on his way to Ohio State. Comic actor Jason Sudeikis plays Owens’ coach and turns in a convincing performance. The athlete and his coach form a bond that sets the stage for Owens’ fame. “Race” takes a bigger view of the times, including the American Olympic committee’s struggle with either attending or boycotting, in response to Germany’s racial policies. William Hurt has a cameo as Jeremiah Mahoney of the American committee. Jeremy Irons has a larger role as Avery Brundage, who convinces the committee to attend. Once in Germany, Leni Riefenstahl sets up her cameras to record the athletes.  Her film “Olympia” captured the 1936 Olympics for the ages. I found the politics and the atmosphere of the contests interesting. “Race” made me want to learn/see more about Jesse Owens. He returned from the Olympics an international star; yet he had to endure the racism of the times, even having to enter back doors to attend banquets in his honor. “Race” tells Owens’ story respectfully; although at times, this biography feels one-dimensional. This history deserves passing on to future generations. Does it deliver what it promises? Respectful biography of amazing athlete. Is it entertaining? Interesting. Is it worth the price of admission. A lesson worth learning.
Posted by Arch Campbell at 12:37:00 AM