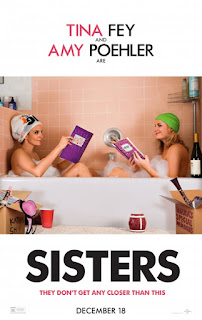 The idea of Tina Fey and Amy Poehler teaming up for a comic movie sounds great. Having seen “Sisters” and because I like and admire them so much, all I can say is I’m glad “Sisters” opens opposite the new “Star Wars,” because the competition will help save them the embarrassment of having their fans see this vulgar misfire. Tiny and Amy play sisters called home when their parents (Dianne Wiest and James Brolin) sell their childhood home - the beloved place where Tina and Amy grew up. Tina plays the ne'er do well sister, while Amy draws the role of the good daughter. Once back in the old neighborhood, Tina flashes a guy working in his yard and talks dirty to him. I think someone must have watched “Trainwreck,” and figured this is the kind of material that would gain Tina and Amy some new younger fans. It was a bad decision. The plot thickens when Tina and Amy elect to throw one last wild party for their now-adult high school friends, before the house transfers. The party gets rolling “Risky Business”-style and by the next morning, the girls and their gang have trashed the place. The swimming pool has been swallowed by a sinkhole, an act that allows Tina and Amy to have a mud wrestling match. A subplot casts Tina in the role of questionable mother to a teenage daughter. This is a misfire, as Tina Fey fans will find it hard to accept. Tina Fey has written and acted in some fine material, notably “Mean Girls.” I hope she’ll aim higher than “Sisters” for her next project. Does it deliver what it promises? R-rated vulgar comedy. Is it entertaining? A misfire for two talented performers. Is it worth the price of admission? No.
Posted by Arch Campbell at 10:31:00 PM