In the Heart of the Sea Review - 2 Stars 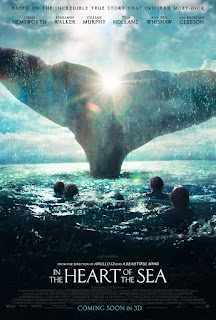 “In the Heart of the Sea” begins as a ghost story. The likable Ben Whishaw, as author Herman Melville, pays a small fortune to hear the story of the whale that destroyed the Essex on an expedition in the early 1800’s. Brendan Gleeson (who served on the doomed Essex as a cabin boy) plays it for horror - with a shake of the head and a haunted look. Director Ron Howard adds this adventure to his string of epics, recreating the 19th century whaling industry for “In the Heart of the Sea.” He shows the violent death of the giant sperm whales, and the butchering that follows. We watch through the eyes of heroic first mate Chris Hemsworth, who bristles at the sometimes dangerous orders of the untried Captain played by Benjamin Walker. The scenes in the ocean are thrilling, even if the coming attractions trailer already revealed the most exciting moments. The excitement of the sea monster has to compete with the ghost story and the survival that follows, which includes a touch of cannibalism.  Melville wrote “Moby Dick” based on legends and tales of the ones that got away. Hemsworth survives and returns to Nantucket to tell a truth, the sea merchants don’t want known... Don’t mess with an angry whale, because he can really do some damage. “In the Heart of the Sea” takes its time, which is a nice way of saying it often drags. There’s a lot of yelling and commanding and splashing, but not much to get excited about. I watched a preview in IMAX, which had me wishing I was sitting in the last row. This epic requires a step or two back. Does it deliver what it promises? Ocean adventure with a big whale. Is it entertaining? Feels long. Is it worth the price of admission? Jaws, it ain't.
Posted by Arch Campbell at 1:02:00 AM