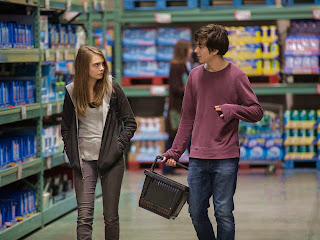 “Paper Towns” has high hopes to cash in on last year’s successful young adult story ‘The Fault in Our Stars” - both based on books by John Green. Nat Wolff begins the story in voice over describing his attraction to the exciting girl next door (played by Cara Delevingne.) Their elementary school friendship dissolves as she takes a more unconventional path. Until one night, when she asks him for help. The next day, she vanishes. Did she leave clues to her new whereabouts? The story changes to a scavenger hunt - a road trip with a group of teens, that ends with more of a whimper than a bang. “Paper Towns” left me with a lot of questions, which I think says more about the thinness of the plot than “Hey, how did  they get the money to do that?” I suppose it’ll be fun to see where this film leads the career of Nat Wolff. As for his co-star Cara Delevingne, I never got what all the fuss was about. Does it deliver what it promises? Young adult coming-of-age road trip romance. Is it entertaining? Slow and thin at times. Is it worth the price of admission? Kind of a disappointment.
Posted by Arch Campbell at 1:45:00 PM