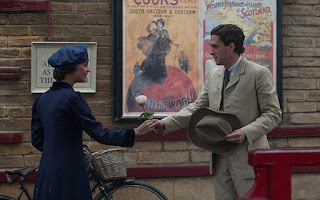 Alicia Vikander got film lover’s attention this spring in “Ex-Machina” - Now, she shows her acting chops in “Testament of Youth,” based on the deeply respected World War I memoir of pacifist Vera Brittain. The story begins, as she pins her hopes on getting into Oxford - a daunting task in pre-feminist England. Once enrolled, she falls in love with her brother’s friend Roland - played by Kit Harington. The war breaks out, her brother and her boyfriend leave for France. She leaves Oxford to work as a nurse on the front. "Testament of Youth" takes its' time to great effect, pausing for moments beautiful and horrific. There are occasional moments when the film gets a little too arty for its own good. Vikander proves herself one of the best actresses in film today. Does it deliver what it promises? World War I epic. Is it entertaining? Beautifully crafted. Is it worth the price of admission? They don’t make movies like this anymore.
Posted by Arch Campbell at 11:49:00 PM