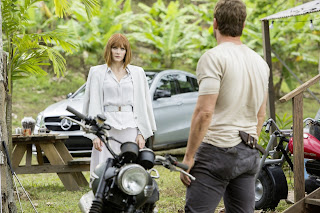 Jurassic World reboots the Jurassic Park franchise with surprisingly good results. Once again, science goes wrong with a little help from money-hungry stockholders and a black ops proposal, headed by the intense Vincent D'Onofrio. Chris Pratt gets the He-Man hero role as a dino trainer, who has a way with young raptors. Dallas Bryce Howard begins in her usual uptight alpha woman role, but comes around to Pratt’s charms once the dino get on the run. In this episode, BD Wong returns as the scientist able to clone the creatures. Demands for buzz at the new Jurassic World park push him to breed a super dino with some unanticipated abilities. Sure enough, the giant gets out of his escape proof cage and starts killing for the fun of it. Two cute kids (played by Nick Robinson and Ty Simpkins) come to visit their marketing genius Auntie (Howard) and wind up getting on the super dino’s radar. Pratt saves the day as special effects take over with great effect. The earth moves and the theater rattles, as we head toward a conclusion right out of Darwin. This reboot requires no prior knowledge: It delivers fabulous special effects and a serviceable story. It’s awfully violent, even for a PG-13. Your kids won’t care. Does it deliver what it promises? Yes, but a little long. Is it entertaining? Yes, but a little long and a lot violent. Is it worth the price of admission? I think it’s a blockbuster.
Posted by Arch Campbell at 9:36:00 PM