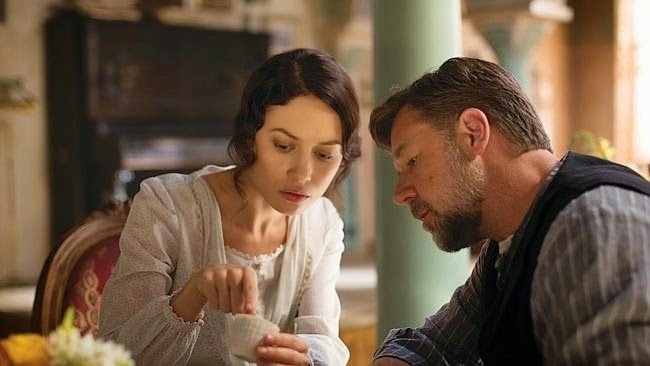 Russell Crowe begins “The Water Diviner” searching, then divining and finally digging, until he hits water and creates a well. These abilities, and the suicide of his wife lead him on a mystical journey to find the bodies of his three sons during the 1915 battle of Gallipoli. “The Water Diviner” comes from a well-regarded novel, inspired by truth. Crowe’s return to the battlefield and his friendship with a Turkish commander intersect with a budding romance with a Turkish mother, grieving the husband she lost in the same battle. Just so you follow, the Turks defeated the Australians at Gallipoli in one of the most horrible battles of a terrible war. The dramatic high point comes in Crowe’s recreation of the death of his sons on the battlefield. Their agony feels as real as the opening scenes of “Saving Private Ryan.” “The Water Diviner” runs long and slow, and offsets that battlefront reality with candlelit romantic scenes, that look like they belong in a different movie. Does it deliver what it promises? Remembrance of the 100th anniversary of a terrible battle in an awful war. Is it entertaining? Long and sometimes clumsy. Is it worth the price of admission? A mixed result.
Posted by Arch Campbell at 1:58:00 PM