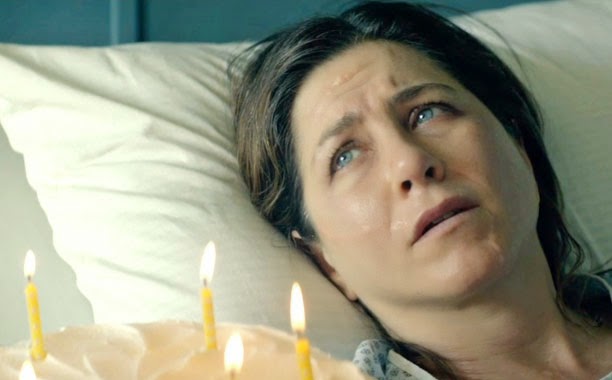 Jennifer Aniston has received a lot of attention for her role as an angry pain pill addict in “Cake.”  Both the Golden Globes and the Screen Actors Guild have nominated her as best actress, although she didn’t make the Oscar cut. She’s proven her abilities in earlier films including “The Good Girl” and “Friends with Money.” Now living alone in a Los Angeles suburb, her back problems prevent her from driving or even sitting up in a car. Her visits to group therapy prove so negative, that the group leader asks her to find another group. The suicide of one of those members (Anna Kendrick) puts Aniston in an even deeper, harder, angrier and more destructive place. Her character in “Cake” makes it difficult for others to be around her. Unfortunately her character also makes it hard on us in the audience. I get it: Aniston can act. But “Cake” comes off as the kind of cliche, that gives indie films a bad name. Does it deliver what it promises? Aniston, angry and depressed. Is it entertaining? Hard to watch. Is it worth the price of admission? I pass.
Posted by Arch Campbell at 3:48:00 PM