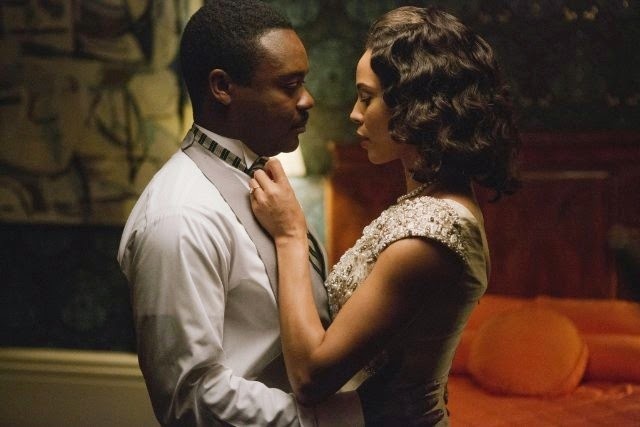 Selma turns history into high drama with thrilling effect. David Oyelowo plays Dr. Martin Luther King in the early days of 1965, as King and his associates plot a grand strategy for the civil rights movement. They’ll take aim at voting rights in the small Alabama town of Selma, where county officials make it impossible for Blacks to register to vote. King and his advisors reason voting will open the door to full citizenship, including the right to serve on a jury. Oyelowo captures King’s humanity and doubts: He gets King’s cadence; and in a couple of scenes, approaches King’s eloquence. The script fascinates, as it plots out the positions of King, President Johnson, and Alabama Governor George Wallace. Tom Wilkinson stands in for LBJ; and Tom Roth manages to prevent his George Wallace from turning into a cartoon. “Selma” tells a story of vision, and yes, of a dream. Does it deliver what it promises? Thrilling historic drama. Is it entertaining? Completely compelling. Is it worth the price of admission? One of the year’s must see movies.
Posted by Arch Campbell at 12:00:00 AM