Rise of the Guardians Review - 2½ Stars 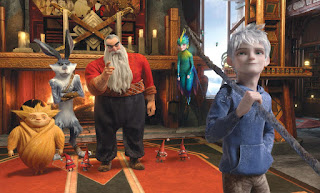 Animated kids fare, in which Santa, the Easter Bunny, the Tooth Fairy, the Sand Man and Jack Frost take on the Bogey Man. Chris Pine voices Jack Frost, the center of this story, with Alec Baldwin as Santa and Hugh Jackman as the Easter Bunny. Jude Law puts some real scares into the bogeyman - so much so, that I would hold off on taking the youngest ones to see this. Occasional laughs help, as this story aims to do for Santa and friends what “The Avengers” did for superheroes. Teamwork always wins and it doesn’t hurt to believe either. Does it deliver what it promises? Kids cartoon with a little bite. Is it entertaining? Some laughs and some scares too. Is it worth the price of admission? Not bad kids stuff - a little too much for the youngest ones.
Posted by Arch Campbell at 9:59:00 PM