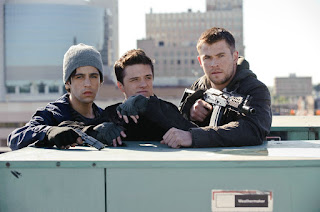 A remake of 1980’s rabble rouser. Life changes in a big way in a little town in Washington state when North Korean armed forces invade. A group of high school football stars and a Marine on leave escape to the woods, where they train in the art of freedom fighting. Rising stars Chris Hemsworth and Josh Hutcherson made this several years ago, before they were well known. The movie got tied up in the legal mess involving MGM. The preview audience laughed out loud several times. Does it deliver what it promises? Same old story, told 30 years later. Is it entertaining? Unintentionally funny. Is it worth the price of admission? Skip it.
Posted by Arch Campbell at 9:53:00 PM