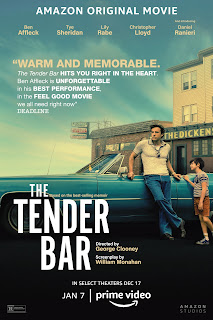 Based on the memoir of J.R. Maguire, The Tender Bar begins as J.R. and his mother move into his grandfather's rambunctious Long Island home.  The nine-year-old J.R. (played by a winning Daniel Ranieri) immediately takes to his Uncle Charlie, played by Ben Affleck.  Uncle Charlie runs a local bar, where he introduces the kid to a Cheers like cast of characters, tutoring him in the ways of the world as he knows it. Growing into adulthood, Tye Sheridan takes over as the older version of a boy who likes to read and wants to write.  The Tender Bar tells an easy to watch, easy to like story.  George Clooney directs what I suspect is exactly the kind of story he loves.  Me. too. I think I'll read J.R. Maguire's memoir next.