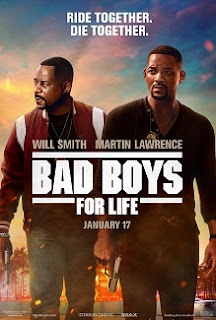 Bad Boys for Life reunites Will Smith and Martin Lawrence 25 years after their original pairing. The usual array of car chases and gun play feels like the same old thing, but a plot twist and a funnier than expected turn by Martin Lawrence surpass expectations. 2 1/2 Stars Rated "R".
"Bad Boys for Life" begins with an outrageous car chase lifted out  of a dozen action movies from the 80's.  Will Smith careens his Porsche down the streets of Miami with Martin Lawrence holding on for dear life reestablishing their roles. The two Miami detectives remain partners twenty five years later, only now Martin's a grandfather ready to retire.  Fate brings Will Smith back to his first undercover case, when the wife of a cartel king breaks out of prison and directs her son to extract revenge.  A plot twist makes this more interesting than it sounds. Smith and Lawrence land more laughs  than expected.  Martin Lawrence especially connects during the back half of the story.  I still wonder why we need this sequel to a trilogy, but fans will likely love it, and a scene during the credits promises more---maybe.
Posted by Arch Campbell at 9:48:00 PM