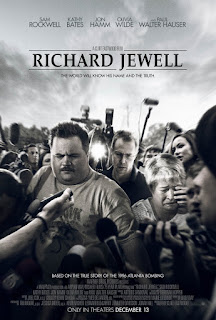 Richard Jewell replays the ordeal of the awkward security guard, who discovered a bomb at the 1996 Atlanta Olympics. Paul Walter Hauser creates a sympathetic portrait of a wannabe cop, judged guilty without a trial. Director Clint Eastwood lays on so much media criticism that he undercuts his story. 2½ stars, "R" Rated.
In 1996, a gung-ho security guard named Richard Jewell discovered a backpack bomb at the Atlantic Olympics. Jewell cleared the area before the explosion, attracting attention as a hero, then a few days later as a possible suspect. Director Clint Eastwood assails the pack journalism that turned Jewell's life upside down, making him a prisoner in the apartment he shared with his mother (Kathy Bates.) The villains of the piece include Atlanta Constitution reporter Kathy Scruggs, played with bravado by Olivia Wilde. Seducing a friendly FBI agent (Jon Hamm) with the promise of sex, Scruggs coaxes the information that the agency considered Jewell a suspect. A front page story follows. "Richard Jewell" produces heart-pounding tension. Eastwood and the screenplay undercut their story with a heavy-handed attack on media and the FBI. Both Scruggs and the FBI agent have passed away, unable to defend the smear of trading sex for information. However, as a viewer, I rooted for Jewell, because of the sympathetic portrait presented by Paul Walter Hauser. Sam Rockwell as his lawyer, and Kathy Bates as Jewell's mother add satisfaction to the story. It might have helped if someone informed Eastwood that newspapers are an endangered species.
Posted by Arch Campbell at 7:53:00 PM