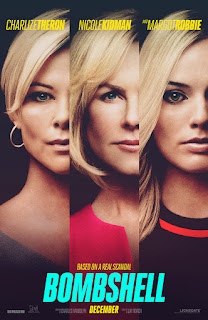 Charlize Theron channels Megyn Kelly completely in the workplace thriller "Bombshell." She's so good, you almost forget the rest of the uneven script about the Fox Network sexual harassment suit that ended Roger Ailes' career. "Bombshell" has a lot of problems, but I wouldn't be surprised if Charlize Theron competes for the Oscar this year. 2½ Stars, rated "R."
"Bombshell" has fun lampooning backstage life at the Fox Network. Megyn Kelly hits a bump after taking on Donald Trump in the Fox Network Republican debate, putting her career on thin ice for a time. Meanwhile, Nicole Kidman (as Gretchen Carlson) loses her job and sues Ailes for harassment. Margot Robbie plays a composite character. Anxious to win Ailes over, she arranges private career advice sessions in his office. In one of the most cringeworthy scenes of the year, Ailes (played by John Lithgow and looking like a bridge troll under layers of fat and makeup) directs Robbie to hike up her skirt and show him her underwear. Carlson wins her suit with backing from Kelly. Fox gets a set of new bosses. If you follow her career, you know Megyn Kelly did not live happily after after. Her move to NBC, a few months later flopped. "Bombshell" hopes to celebrate a few moves, that (I bet) don't amount to much. Still, I can't deny it's a fun movie to watch.
Posted by Arch Campbell at 9:28:00 PM