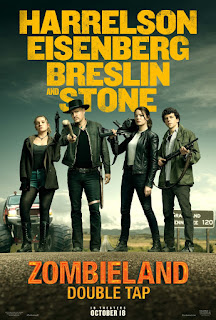 "Zombieland: Double Tap" revives a 10-year-old zombie comedy just for the fun of it. 2 stars, rated "R."
"Zombieland: Double Tap" picks up where the original left off in 2009. You may recall the first movie gained fame for turning Bill Murray into a zombie and killing him. Woody Harrelson, Jesse Eisenberg, Abigail Breslin and Emma Stone survive in a world taken over by zombies. Safely living in the White House, Abigail and Emma get bored and leave. The men take chase and begin a road trip, including a stop at Graceland to pay tribute to Elvis. "Zombieland: Double Tap" begins with the Columbia Pictures logo, including the maiden holding her torch high. Suddenly a zombie rushes in only to get clobbered to death by the maiden's torch. It's that kind of movie. I laughed, often out of surprise. The best surprise arrives as the credits roll when Bill Murray returns, just for the hell of it.
Posted by Arch Campbell at 5:46:00 PM