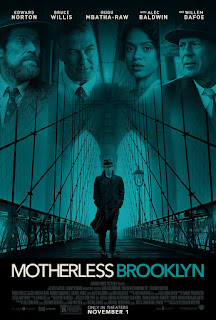 "Motherless Brooklyn" runs long, tells a confusing story, and features a distracted Edward Norton trying to play a character with Tourette Syndrome. I love period mysteries, but this one disappoints. 1 star, rated "R."
In "Motherless Brooklyn," Edward Norton feels compelled to solve the mystery of his boss and mentor (played by Bruce Willis.) Norton chooses to give his character Tourette Syndrome. The affliction (as portrayed on screen) comes and goes at the convenience of the story. Bobby Cannavale, Alec Baldwin, and Willem Dafoe show up as various villains. Baldwin hams it up as a powerful New York City official. Baldwin's hard to watch without thinking of SNL. "Motherless Brooklyn" can't quite settle on a period setting. Gangsters drive 1930s sedans, while Norton tools around in a 1957 Chevy. At two and a half hours, "Motherless Brooklyn" drains, instead of entertains.
Posted by Arch Campbell at 11:28:00 AM