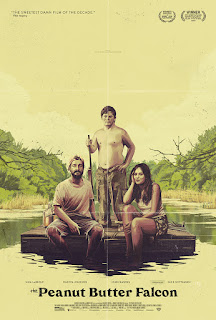 "The Peanut Butter Falcon" casts Down syndrome actor Zack Gottsagen as a modern day Huck Finn. 2½ stars, rated PG-13.
Newcomer Zack Gottsagen's energy and humor fuels "The Peanut Butter Falcon," a comic adventure in the style of "The Adventures of Huckleberry Finn." Gottsagen, who in real life has Down syndrome, met screenwriters Tyler Nilson and Michael Schwartz at an arts program for young adults.  The screenwriters wrote "The Peanut Butter Falcon" for Gottsagen, who plays a Down syndrome patient warehoused in a retirement home. The story begins as Zak entices Bruce Dern to help him escape. The two men pry open a window, and Zak tastes freedom. Zak's social worker (Dakota Johnson) receives orders to find him or else. Along the water, Zak meets Shia LaBeouf, on the lam for stealing fishermen's catches as well as a boat. Zak and LaBeouf bond, and make a pact to find the Salt Water Redneck, a wrestler Zak admires. The comparisons to "Huckleberry Finn" are purposeful and include a trip on a raft. The actors, especially Gottsagen, elevate the script, which feels a little thin as the story progresses. "The Peanut Butter Falcon" remains charming, and a gift for the Down syndrome community.
Posted by Arch Campbell at 8:41:00 PM