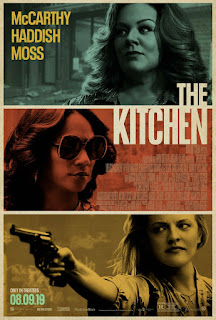 "The Kitchen" plays like a weak copy of "Widows," a much better story of mob wives who learn the family trade. The script lets a talented group of actors down. 1 star, rated "R."
I had high expectations for "The Kitchen," thanks to the three lead actresses (Melissa McCarthy, Elisabeth Moss, and Tiffany Haddish.) They play mob wives, whose husbands go to jail. When the promise they'll be "taken care of" turns sour, Melissa and friends decide to develop the mob's ailing protection racket. Guns blaze, bodies drop, and the ladies hone their mob skills. Too often, the plot depends on unbelievable events. Elisabeth Moss makes a strong impression as a once-battered wife determined not to take it any more. Tiffany Haddish contributes another impressive performance. Domhnall Gleeson and Margo Martindale add spice, but the script lets this great group down. I don't buy the heat, so I'm staying out of "The Kitchen."
Posted by Arch Campbell at 5:28:00 PM