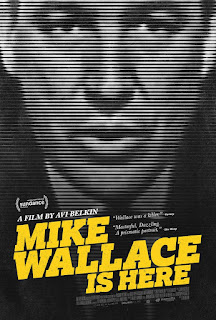 "Mike Wallace Is Here" showcases the "60 Minutes" superstar's greatest hits, from the 1950s through the end of his career. Did his style influence cable's tabloid stars today? Well, yeah. 3 stars.
"Mike Wallace Is Here" traces the extraordinary newsman's early days as actor/pitchman to his performance as host of the mid-50s local television interview program "Nightbeat," to his ultimate place as superstar host of "60 Minutes." It gives a sense that Wallace's background as a performer laid the groundwork for his success on "60 Minutes." This "greatest hits" collection chops things up a little too often. Wallace's questions are so good, I wanted to hear the cut-off answers. The documentary uses Wallace's career to trace the impact of performance and show business on television news. Warts and all, it revisits law suits by General William Westmoreland, and reminds viewers of a turning point when CBS cancelled a "60 Minutes" segment on tobacco, rather than risk a court battle. We hear Wallace defend himself as the subject of interviews by Morley Safer, Barbara Walters and others. "Mike Wallace Is Here" glosses over how he got there, in favor of what he did when given the chance. "Mike Wallace Is here" leaves us wondering where we are today, who our Mike Wallace is now, and is he the performer who influenced our tabloid times?
Posted by Arch Campbell at 11:07:00 AM