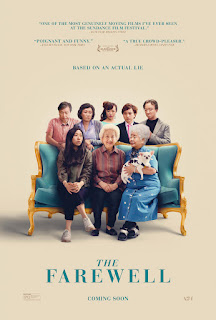 "The Farewell" gives Awkwafina another breakout role as an Americanized Chinese-born millennial returning to China for a final visit with her dying grandmother. The result is funny, surprising and never sentimental.
Awkwafina, now known for her breakout role in "Crazy Rich Asians," tops that in "The Farewell." She plays Billi, a Chinese-born, U.S.-raised millennial returning to China for a last visit with her beloved grandmother. Word has arrived that grandma has terminal cancer. The family vows to honor Chinese custom and not let the elderly matriarch know she's dying. But will Americanized Awkwafina go along along with it? "The Farewell" strikes some funny truths about family and generations, and never goes where you expect. "The Farewell" is a summertime delight.
Posted by Arch Campbell at 10:15:00 AM