Once Upon a Time in Hollywood Review - 4 Stars 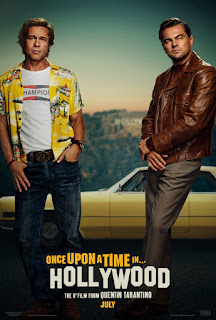 Once Upon a Time in Hollywood showcases director Quentin Tarantino at his best. A recreation of 1969 Los Angeles, that mixes joy and danger, told with style. 4 stars, rated R.
Once upon a time in Hollywood, Netflix didn't exist, television was a vast wasteland, and film fans loved buddy movies with actors like Newman and Redford. Quentin Tarantino's "Once Upon a Time in Hollywood" recreates the California of 50 years ago, using 1969 Los Angeles as the setting for a comedy about Leonard DiCaprio, a failing TV western star, and his stunt double/best friend played by Brad Pitt. The film captures the joy of those years when Californians worshiped their cars and breezed along the city's vast freeway system. We watch DiCaprio shooting various guest shots on movie lots, struggling with alcoholism and blowing his lines. We watch Pitt challenge a major star and come within a whisker of busting his chops. The pair are a couple of fun-loving bros. Beneath this bubbling world, if you know your history, Charles Manson and his followers plot revenge on society, specifically on ethereal starlet Sharon Tate (played by Margot Robbie.) Tarantino mixes fact and fiction, while lovingly recreating back-in-the-day L.A.. You need to love Tarantino to love "Once Upon a Time in Hollywood." He had me at the opening frame.
Posted by Arch Campbell at 4:53:00 PM