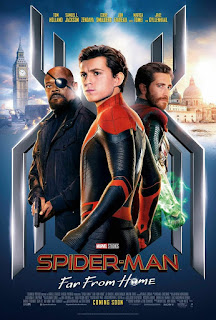 "Spider-Man: Far From Home" picks up where "Avengers: Endgame" left off, with great humor and a compelling script. Marvel shows once again they know their audience, and they know their stuff. Rated PG-13, 3 stars.
Tom Holland makes Spider-Man easy to like in the Marvel Universe's latest epic "Spider-Man: Far From Home." Holland won me over as a geeky teen who just happens to have super strength and super powers. He and his high school friends embark on a summer tour of Europe, the better to provide global backdrops, including Venice, which you will not be surprised to learn gets blown to heck in an early battle. While not fighting towering water creatures or burning fire villains, our hero pines for Zendaya. They have great chemistry and make an extraordinarily cute couple. Marvel loads the front with an action tease and several laughs about the plot from "Avengers: Endgame" known as "the blip" - the dirty deed that wiped out several characters for several years. I loved the addition of Jake Gyllenhaal as "Mysterio," who lives up to his name. Samuel Jackson adds his usual sly presence. The writers manage to keep several subplots going. As usual, the final third builds to a fight to save the world and everyone in it. "Spider-Man: Far From Home" stages that fight with more than usual creativity. The credit sequences serve up a couple of advance scenes that drew oohs and ahhs and one final scene worthy of a "WTF." It's hard not to like the combination of acting, story, and special effects. If you're a Marvel fan, you gotta love it.
Posted by Arch Campbell at 11:59:00 PM