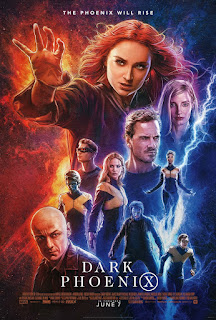 "Dark Phoenix" presents the final chapter of the X-Men series. A good move, since X-Men ran out of ideas years ago and feels generic. Rated PG-13, 1 star.
Sophie Turner (as Jean Grey) saves the space shuttle by taking in a strange energy force headed toward earth. The energy she absorbs turns her into "Dark Phoenix," and transforms her from hero to villain. The other cast members fight her and a group of evil aliens led by Jessica Chastain. "Dark Phoenix" feels like dozens of other superhero sagas. When a series gets this stale, it's time to shut  down.
Posted by Arch Campbell at 10:04:00 PM