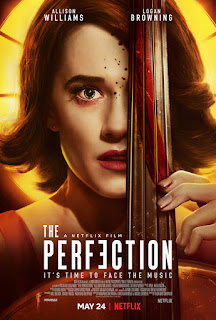 The best horror flick I've seen since "Get Out," with Allison Williams and Logan Browning as cello prodigies. Nothing is as it seems, in this mind-blowing (Netflix) thriller. Rated R, 3½ stars.
Allison Williams, who earned kudos in "Get Out," returns to the horror genre as a once-promising musician, whose mother's illness ends her career. As "The Perfection" begins, Williams meets Logan Browning, the musician who replaced her as star pupil of taskmaster Steven Weber. They meet at student auditions in Shanghai, where they bond, party and fall into bed. But has Allison engineered this in the name of jealous revenge? Well, not so fast. "The Perfection" presents one set of facts, hits rewind, and comes up with something entirely different. It never goes where you expect, but does deliver the expected thrills, including bodily fluids, dismemberment, psychotic breaks, and a mind-blowing extravaganza of an ending. "The Perfection" is the best horror thriller I've seen, since "Get Out."
Posted by Arch Campbell at 7:35:00 PM