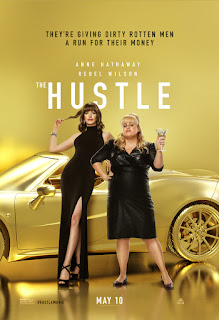 The Hustle - Rated PG-13, 2 stars. Remake of a remake of a remake, inspired by a classic. Nothing new here.
Long, tall Anne Hathaway teams with ball of fire Rebel Wilson for an empowered female remake of "Dirty Rotten Scoundrels," the 80s era Michael Caine/Steve Martin con man comedy. Hathaway's a cool character working scams on the French Riviera. Wilson's a vulgar, but free spirit, working her own scams. First the women fight, then team up on a bet of who can swindle boyish tech whiz Alex Sharp. "The Hustle" tries hard, but only produces smiles rather than laughs. "Bridesmaids" it ain't.
Posted by Arch Campbell at 3:16:00 PM