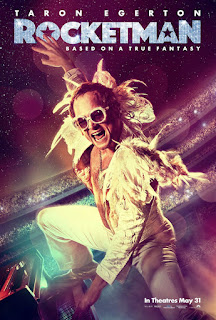 "Rocketman" sets Elton John's life to his songs with spectacular results, thanks to stirring storytelling, spectacular musical numbers, and a great performance by Taron Egerton. Director Dexter Fletcher tops his previous success in "Bohemian Rhapsody."
"Rocketman" breathes new life into the rock star rise & fall and redemption story. Taron Egerton opens as Elton John superstar, charging into an AA meeting to share the story of his life. That device sets up a series of spectacular musical numbers, explaining Elton John's life and times. The numbers are so splashy, you can't take your eyes off the screen. The movie tells all, including drugs and sex, and earns its "R" rating. "Rocketman" mixes music and performance with direction and production into a heady mix. This is one of the most exciting movies of 2019.
Posted by Arch Campbell at 11:24:00 AM