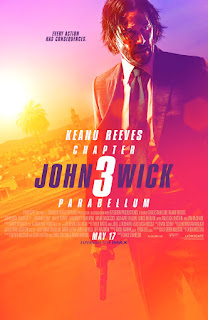 John Wick: Chapter 3 - Parabellum. Rated R, 3 stars. Two hours of martial arts mayhem. I tried to resist, but can't.
Fans of the series know John Wick as a legendary hit man in trouble with a powerful underground organization after killing one of their leaders. Chapter 3 begins with Keanu Reeves as Wick, the recipient of a multi-million dollar dead-or-alive (but preferably dead) bounty. Now he must outrun every ruthless killer in New York. "John Wick: Chapter 3" showcases a series of breathtaking martial arts set pieces, separated by a short scene of dialog. I particularly liked Anjelica Huston as a Russian mob queen, as well as Laurence Fishburne as an underground leader, and Ian McShane & Lance Reddick as operators of a safe space hotel. Midway in the story, Halle Berry arrives for a bravura fight featuring Halle, Keanu and two crotch-eating dogs. The audience reaction reminded me of a pack of lions receiving red meat. "John Wick: Chapter 3" is not for the faint of heart, but if mayhem is your thing, get in line now.
Posted by Arch Campbell at 11:44:00 AM