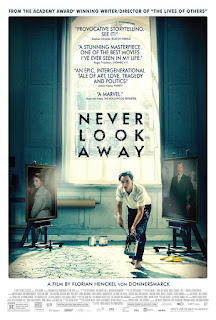 Boy, did I miss out. Last February, I heard about a three-hour epic in German, based on the life of a painter. Not for me, I thought. But I kept hearing good things; so I caught a screening on a chilly afternoon, and received a reminder of what I love about movies. "Never Look Away" tells an epic of a German boy who lives through the war. He witnesses the hardship of Nazi rule, including the price paid by a dear aunt, whose free spirit sparks his interest in art. After the war, living under National Socialist rule in East Berlin, he enters art school, shows talent, finds his soul mate, and brushes up against evil, ultimately fleeing to the West. "Never Look Away" received an Academy Award nomination as Best Foreign Language Film. Unfortunately, the film was overshadowed by Roma and misjudged by people like me who stop at "... in German and runs three hours." The story telling, the photography, the direction (Florian Henckel von Donnersmarck of "The Lives of Others") the epic sweep of 'Never Look Away" put viewers in a trance. Art, politics, romance and war combine and fascinate. I hope you get a chance to see it. "Never Look Away," 4 stars, rated "R." Does it deliver what it promises? A grand, fascinating epic. Is it entertaining? Fascinating. Is it worth the price of admission? A solid yes.
Posted by Arch Campbell at 8:15:00 PM