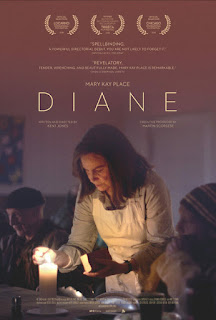 Mary Kay Place plays "Diane," a helper to her friends and community. She starts each day with a list, and never fails her circle of friends. But her son has drug problems, and her conscience still regrets what she considers a sin from her past. Most of us recognize the character. Her story unfolds seamlessly, as the years roll by. "Diane" tells a story of women who help, of community, and the inevitable loss that comes in the years beyond middle age. "Diane" often gets depressing, but ends on a thought-provoking note. "Diane," 2½ stars, not rated. Does it deliver what it promises? A woman's story. Is it entertaining? Realistically depressing. Is it worth the price of admission? For the acting and honesty.
Posted by Arch Campbell at 10:00:00 PM