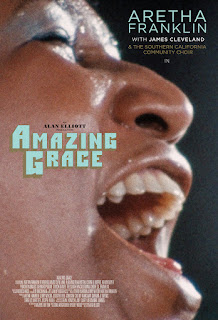 In 1972, Aretha Franklin decided to record a gospel album before a live congregation. Her producers set up the session at the New Temple Missionary Baptist church in Los Angeles. Franklin's record label (Warner Brothers) hired Sydney Pollock for a "making of" documentary. The official explanation for the delay is Pollack didn't provide "clappers," a way to sync sound to image. I have a feeling a few other behind-the-scenes issues also delayed this project. Watching it now, feels like traveling back in time to the electric early period of Franklin's career. She comes to the podium, sits down, plays the piano and begins to sing. We see Aretha as a young woman with an amazing gift. Occasionally the film captures a flash of her insisting on a restart or clear instructions. She's in charge. I marveled at her ability to perform, in a sea of confusion. Pollock rushes around, walking into shots. People get up and dance and move. We see Mick Jagger in the audience. We hear her father (Reverend C.L. Franklin) taking time to give his blessing. Powerful stuff. The music includes "Amazing Grace," "Mary, Don't You Weep," "What a Friend We Have in Jesus," and an unforgettable treatment of "You've Got a Friend." "Amazing Grace," 3 stars. Does it deliver what it promises? Time travel to the early days of an amazing career. Is it entertaining? As history and performance. Is it worth the price of admission? Priceless.
Posted by Arch Campbell at 10:56:00 AM