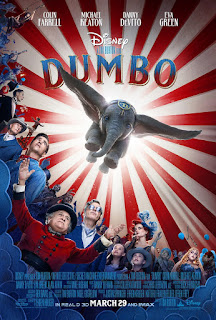 Disney has high hopes for Tim Burton's live-action remake of the 1941 animated "Dumbo." The story of a baby elephant, who looks goofy because of his giant ears has a contemporary ring. He's different, and deserves respect. "Dumbo" gets that respect when he discovers his big ears give him the ability to fly. Director Tim Burton has made a lot of dark films ("Beetlejuice," "Edward Scissorhands," "The Nightmare Before Christmas.") Dumbo's no exception. Early in the story, baby Dumbo's mother is sold... baby and mother separated. Two children, whose mother died in the 1918 flu epidemic, befriend him. Dumbo is born into a post-WWI raggedy circus run by impish Danny DeVito. The circus setting gives Burton visually interesting and often spooky settings. Once Dumbo's ability to fly emerges, Michael Keaton arrives with a fist full of cash. He brings Dumbo and his friends to the big city, where bad guys use the elephant for profit. When things go wrong, lives are at risk. Burton spends so much energy creating his odd backgrounds, that the story often drags. The result will probably make many kids restless, as well as the adults bringing them. "Dumbo," rated PG, 2 stars. Does it deliver what it promises? Live-action, flying baby elephant fantasy. Is it entertaining? Interesting, but drags. Is it worth the price of admission? Not quite for everyone.
Posted by Arch Campbell at 6:02:00 PM