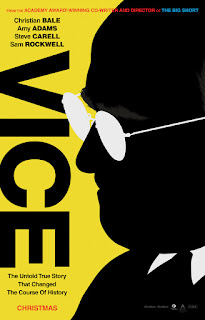 "Vice" deserves your attention, thanks to an outstanding performance by Christian Bale. As former Vice President Dick Chaney, Bale looks, sounds and captures Chaney's public essence. As Chaney's wife Lynn, Amy Adams captures her determination to make her husband make something of himself. We watch Chaney move from lineman to intern to functionary to Chief-of-Staff to Congress. Lynn rises with him, and the couple become a dynamic DC twosome. Along the way, we meet Steve Carell as Donald Rumsfeld, Tyler Perry as General Colin Powell, and Sam Rockwell as Texas Governor and President George W. Bush. Rockwell turns his cameo into an award-worthy astonishment. Adam McKay has the knack to turn facts and figures into entertainment. He uses many of the same techniques of "The Big Short." He's cooked up a dark satire that makes what's going on today no surprise. Sometimes, "Vice" goes a little long. Sometimes, "Vice" gets a little too dark. "Vice" is a good movie with great performances. "Vice," 3½ stars, rated "R." Does it deliver what it promises? Political/historical satire. Is it entertaining? Often. Is it worth the price of admission? For the performances.
Posted by Arch Campbell at 12:50:00 PM