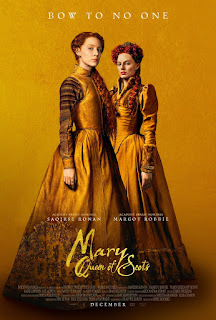 "Mary Queen of Scots" arrives with high expectations, starring two of the best actresses of our time. Saoirse Ronan plays the lead... in history, the only legitimate, living child of King James V. Her cousin (Queen Elizabeth I) pushes Mary out, after marriage makes Mary Queen Consort of France. Margot Robbie, an equally exciting A-list actress, plays Elizabeth with bile and cunning. She holds the Crown, thanks in part to Mary Stuart's Catholicism. The power struggle intensifies when Mary returns to Scotland. Ronan gets the showier role with more screen time. Robbie holds our attention as events lead to a face-to-face encounter. Their showdown feels like a let down, as the two debate in a room filled with sheets. We finally gets the stars together, but we can't see them. "Mary Queen of Scots" presents a complicated, difficult-to-follow struggle.  It may be good for you, but it takes a lot of effort to choke down.This is the movie equivalent of spinach. "Mary Queen of Scots, rated "R," 2½Stars.  Does it deliver what it promises?  Two great actresses in a historic drama. Is it entertaining? Difficult to follow. Is it worth the price of admission? The price of spinach.
Posted by Arch Campbell at 12:00:00 AM