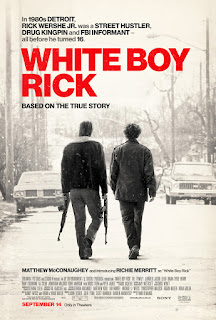 "White Boy Rick" tells the true story of a 15-year-old kid drawn into Detroit's underworld in the 1980s. Newcomer Richie Merritt plays Ricky Wershe Jr., who in real life was recruited by the FBI to inform on the drug culture of his friends. Wershe gets the right amount of innocence across for a story you know won't go anyplace good. Matthew McConaughey channels another "Dallas Buyer's Club" kind of character as Ricky's father. The FBI leverages its knowledge of the father's illegal gun business to lure the son into their scheme. The movie captures the grime and grit of a city in decline. Jennifer Jason Leigh and Rory Cochrane add realism as  the agents who ultimately cut Ricky loose. It's fun to see Bruce Dern as Ricky's grandfather. Once out of FBI supervision, the kid becomes an actual drug dealer, and as the previews indicate, winds up in jail for life. "White Boy Rick" tells a cautionary tale of revenge, murder and betrayal. It ends with a depressing, predictable thud. "White Boy Rick," rated "R," 2 stars. Does it deliver what it promises? Crime story. Is it entertaining? Depressing. Is it worth the price of admission? A downer.
Posted by Arch Campbell at 4:47:00 PM