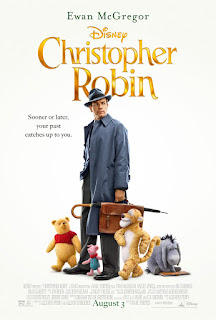 Christopher Robin tells his stuffed animal friends goodbye, and leaves the 100-acre woods for boarding school in the poignant opening scene of "Christopher Robin." Winnie-the-Pooh and his friends understand that children grow older and move on. Or do they? In "Christopher Robin," we meet the boy as a man needing a few life lessons from his little friends. The inner child idea isn't new, but it gets a fresh look in this mix of animation, puppetry, and live action. Ewan McGregor has just the right touch as grown-up Christopher. Great voice work for the animals includes Jim Cummings' incarnation of Winnie-the-Pooh and Brad Garrett as the always pessimistic Eeyore. "Christopher Robin" avoids sentiment, but makes its point that growing up isn't all that great. I laughed, and misted up, and felt a few pings from my own childhood. "Christopher Robin," rated "PG," 3½ stars. Does it deliver what it promises? Funny and touching story of rediscovering one's childhood. Is it entertaining? Funny and charming. Is it worth the price of admission? Family entertainment.
Posted by Arch Campbell at 10:12:00 PM