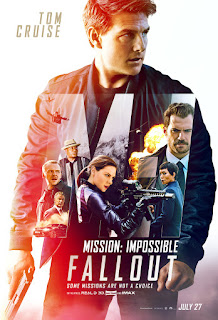 Tom Cruise stakes his claim on the rest of the summer box office in "Mission: Impossible - Fallout." The sixth episode of the series continues to thrill and meet expectations. Cruise and his talented co-stars (including Simon Pegg, Ving Rhames, Rebecca Ferguson, Alec Baldwin and Angela Bassett) engage in a series of set pieces, including a alley shootout, a Paris motorcycle chase, a plunge from a jet thousands of feet in the air, a climb into a helicopter, another  plunge to earth and a literal cliffhanger, plus a digital countdown clock seconds away from destroying one-third of the world. Sean Harris, a  nemesis from the previous film, returns for more trouble. Henry Cavill (AKA Superman) shops up as fellow spy (or mole.) Vanessa Kirby, who made an impact as Princess Margaret in "The Crown" has a delicious cameo as a murky friend (or foe.) I never took any of this seriously, but had fun watching. If you love Tom Cruise, and you love the "Mission: Impossible" series, you'll love this latest. "Mission: Impossible - Fallout," rated PG-13, 2½ stars. Does it deliver what it promises? And then some, just don't try this at home. Is it entertaining? 30 minutes too long, but who's counting? Is it worth the price of admission? Your choice, should you choose to accept it.
Posted by Arch Campbell at 3:03:00 PM