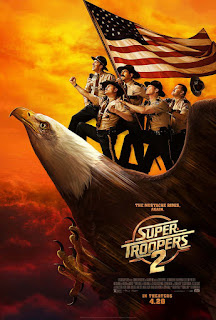 Some might remember the original "Super Troopers," a 2001 vintage comedy about a bunch of stoned highway patrolmen who pull jokes on each other as well as hapless drivers. Now comes the sequel, once again created by the Broken Lizard comedy team. The plot sends the lawmen to Canada, where a mistake in the original border will be solved by turning over a Canadian town to America. As part of the hand-off, the Super Troopers replace Canadian Mounties, who aren't thrilled. Rob Lowe contributes a cameo as mayor of a small Canadian town. Lynda Carter plays the governor of Vermont (by the way she looks smashing.) Most of the humor concerns body parts and functions, punctuated with a little gratuitous nudity. I laughed every now and then, although it seemed like a lot of work.  "Super Troopers 2," 1 star, rated "R." Does it deliver what it promises? Not as funny as advertised. Is it entertaining? Occasional laughs. Is it worth the price of admission? Skip it. In fact, not even free on cable.
Posted by Arch Campbell at 11:55:00 AM